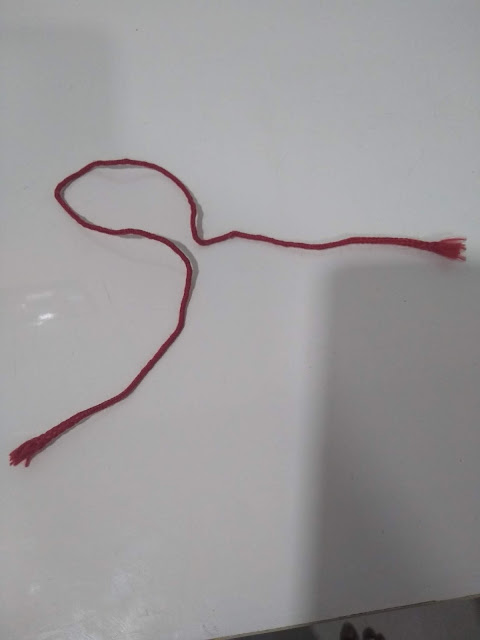 This red thread. DD1 picked up this thread and wanted to tie around my wrist. She asked me to sit beside her so she could tie. It was sleep time, I was making bed. I said 'Yes' and sat by her side.

She attempts to knot the thread around my wrist. This is not the first time that she is doing it, she often tries to knot some band that she finds, around my wrist. May be, if I am not wrong, she has done it a little less than 10 times?

She went around my wrist with the thread in her little fingers and intertwined the two loose edges. She understood that something was not right and that she needed some time. She said 'naku ravatledu, but try chesthunna, konsepu undava' (I am not able to but I am trying, can you stay for a while please?). This. This statement. This feeling of hers. This clarity. This perseverance to try. This sense of achievement. This is what I fall for, in any child, here, in specific, DD1.

And, she knotted it. Finished it with two knots. Nothing can beat the feeling of contentment of a child after solving a problem.

There might be a hundred activity books that have knotting, lacing, zipping as a part of them. But nothing beats this emotional satisfaction that the child gets upon solving a real life activity(problem of knotting, in this case).

What more!! Activity kits are being advertised as saying that they would keep the child enganged and seated at a single place so that mothers get the time to go out for shopping. The same child, when really trying to solve a real life problem would be shooed away or hurried up for his task-to-be-done at that moment by the same adult.

Keeping the kids engaged with tight schedules and activity books OR respecting their choice of finishing the task that they chose at the moment?

If we notice, there are umpteen number of instances in everyday life where children, from as young as infants, are continuously exploring, trying out new stuff, solving problems, building things but are often discouraged in order to get back to what is 'supposed' to be done according to the elders at that moment.