Try to understand your child's intention

Every time A knocks on the main door she keeps holding on to the bolt and moving it across both the sides while we are waiting for the door to be opened.

And whenever the bolt reaches the other end due to which it gets locked within it, I keep explaining her that if she pushes the bolt further into it, then the door cannot open because it locks both the sides.

This action of hers and my explaining to her kept repeating every single time we knock on the door.
I never gave it a serious thought until two days back when I understood what A was actually trying to do when moving the bolt. If we actually ponder over what kids do, why they do and understand them while they do anything, their thinking actually amazes us. We ought to learn something from their behaviour. If my reaction to her action of moving the bolt was any one of - getting irritated, showing irritation in my tone, yelling for locking the door that way and wasting time - any of these, then I would not have understood her real intention behind what she was trying to do.

Just two days back, she managed to push the bolt to a little extent into the other end and told me what she noticed. That exact thing really surprised me. It was her urge to reach her goal that kept her trying every time she stood knocking on the door.

And, this is what she did each time we waited for the door to be opened.

The position of bolt right when we reach is this. Notice the length L1. 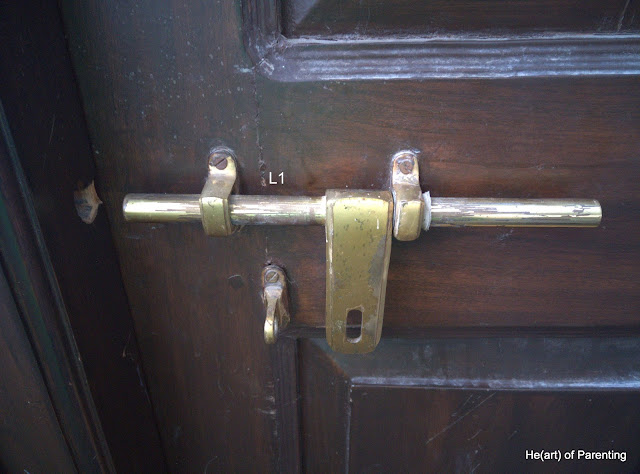 She tries to move the bolt while observing the lengths L1 and L2. This is when I start explaining to her that pushing it further in will lock the door and it cannot be opened. But only after knowing what she is actually trying to do, I realised that my explanation was irrelevant to her at that moment. It was not needed. Instead, all that she needed was encouragement and explaining her how it could be achieved. Any way, I am happy that I was always positive towards what she had been trying to do, never yelled or anything and that kept her going and in fact, taught me about her. Also, with consistent trials, she understood how she could achieve that she wanted, all by her own. Positive environment is all that kids need while learning how things work.

To reiterate, she tries to move the bolt while observing the lengths L1 and L2 like in the image below:

It was only two days back that she managed to push the bolt little further and make the two lengths L1 and L2 equal when she exclaimed loudly 'Look here, this and this are same' while showing it to me. THIS is the moment I realised her actual intention behind the action of moving the bolt here and there. 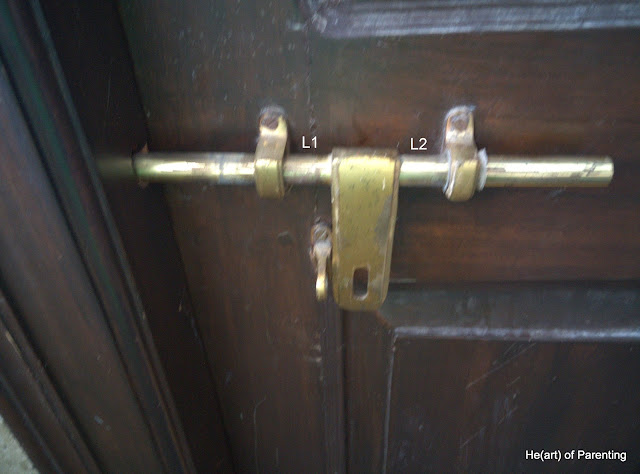 Based on this scenario, I would like to highlight few points:


You may read a related post here: Are you teaching or controlling your child?
Labels: ArtOfParenting respectthechild