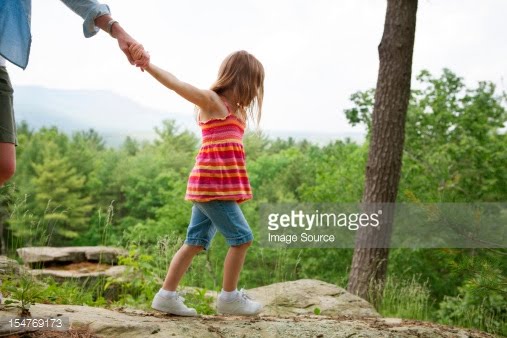 The other day, I decided I will only follow my child in our evening walk and listen to what she has to say. I didn't hinder in either her imagination or her path. My only focus was her, her learning, her keenness when observing nature while walking. All I did was only to ask questions that kept the little one thinking for a while before coming up with a genius answer.

We started off our walk in the pathway, me following her lead.

Next, she stopped by the huge hose that is used for watering. Told her its the same hose that itsy-bitsy spider was trying to climb in, then she sang the rhyme and I explained to her how the spider fell down through the hose and could climb up once the water dried up due to sun. There were two hoses of different colours that she noticed and mentioned to me the same.

Next, she stopped by the turn, just slowed down her walk observing the ground and took to her speed again.

Next, she stopped by the teddy-bear shaped trash can, and turned around as she sang the song 'teddy bear teddy bear turn around', spoke to the teddy for a while, asked me to see how it was standing there.

Next, she spotted the sky, the birds flying high and exclaimed to me. I asked her which colour the sky is in, spoke about clouds, rain and rainbow.

After some distance, she stopped by the inverter set up, asked me what it was and listened to me keenly as I explained to her.

Next, she stopped by the fire extinguisher hose and asked me what it was, as usual, she listened to what I had to say.

After yet another few steps, she stopped by the transformer, again waiting for me to explain about it.

Walked further down while talking about a couple of other things that generally happen around us, all of which I may not be able to pen down in this post.

Then, she spotted the moon, and exclaimed at me 'moon!'. She also spotted her shadow in the moon light and played around for a while.

(Point to note: the child is sure to pick dirt from ground, try to go where she is not supposed to go(say, some construction site), or whatever that you do not approve of her. Do not panic. Explain what it is and why it is not supposed to be done the way she thinks. This post could help - teaching vs controlling)