Children and mess - Is it really a mess? 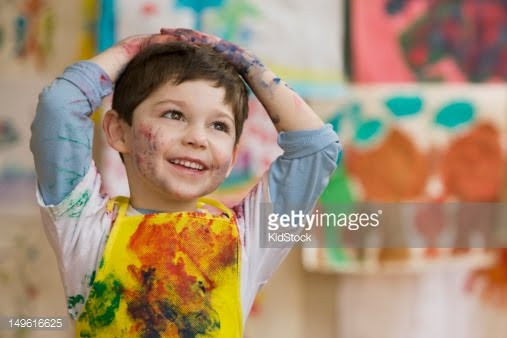 Children who do not follow what parents ask them to do are usually shunned away, not heard of and asked to do what is said. Parents having an open mind and trying to encourage children to constantly keep trying something new out of the old stuff lying around the house becomes crucial in creative play. Mess is something that is guaranteed to happen and let it happen. Just have the patience to clean it up and the courage to guide your little child's experiment in a positive direction.

One example is, A was playing with some seeds and there came a moment when she lined up the seeds on her leg, and shook her leg. She noticed the seeds falling down and repeated the same for quite a few times. What she did may be funny, not of a great value to parents and could be said  'That is not the way to play, it is all nonsense'. I looked at her for a while, spoke to her about what she was trying to do. Firstly, she lined all the seeds up, on her thigh, by shaking she is noticing that the seeds fall down. I told her how all of those happen by examples of hitting one seed to the other and showing her how the second one moved when I only hit the first seed. (Like the carrom game) I also showed her the carrom game, lined up couple of carrom coins and hit the first one with striker, showed her how the entire line of coins move and shatter with just one strike. And she was surprised by how it happens. Children are constantly learning something. Try to aid in their learning by understanding what's going on in their mind, rather than just yelling at their acts.

Another day, A was dropping a glass repeatedly to hear it hit the ground, roll over and see it coming to a halt in a while. I let her do, also observing what she is trying to learn out of it. Then helped her by explaining so, yes, any object that you leave at a height is bound to fall down, and that which falls down makes sound, moves to some extent and stops. I told her what moving and stop meant with the help of some objects. I even showed her how objects fall to ground by holding some soft ones to shoulder's height and letting them free. I told her it is gravity that pulls everything to the ground. She may not understand the scientific terms, but, she is sure to learn that there is some theory behind every behaviour. She did the feat of dropping a glass couple of times, noticed all points that I told her in the glass' behaviour and left it there. That's it. She is done. She found some ability to do a specific thing. I told her what is happening and why it was happening, she heard me keenly, noticed the same in whatever happened and left it. There was no need to yell at the child to stop throwing that glass, there was no need to hit her for making noise, there was no need to get an ache in my head thinking of my child's behaviour. Everything is normal. Every act is a learning experience for children.

By letting children play freely by themselves, you are bound to end up cleaning some mess around them. Do not only look at what you call it a mess. Behind the mess, there was a genius brain trying to figure out which colour to pick first in the paints, which crayon to hold to colour the ball, observing how each crayon is giving some colour, observing how to fit in blocks to build a tower, picking which colour block she is supposed to use to build tower, fitting the nuts into their bolts and all that they are continuously learning which even an adult brain cannot understand.